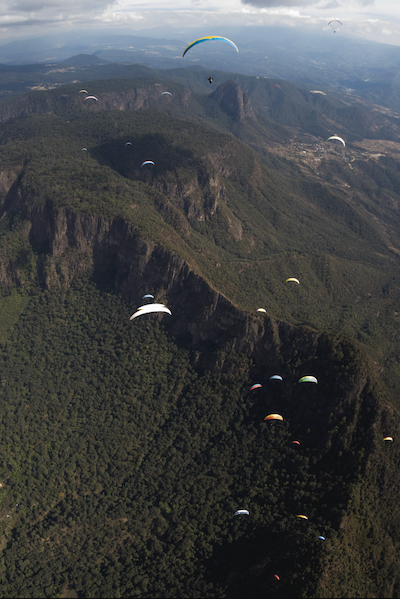 From the 6th to the 17th of December the World’s best pilots will be taking to the skies above Valle de Bravo, 150km west of Mexico City, for the last event in this 30th anniversary year of the Paragliding World Cup.

El Peñón, Temascaltepec is a well-known competition venue having already hosted two Super Finals (2011 and 2015) and a World Cup (2014). It is famous for its consistent and reliable flying conditions. The best time to fly is November to May with the XC season kicking off properly in December, when the conditions allow 100 km triangles with 4,000m cloud bases.

The launch was expanded in 2008 in preparation for the World Championships. The ramp has space for at least four paragliders at the same time and allows 150 pilots to take off in less than 40 minutes.

There are many favourites to win this year’s title, from local pilot Manuel Quintanilla, to any of the staggering 21 pilots taking part who have already won a World Cup. They have won an incredible 39 World Cups between them!

Not to mention the 5 World Champions and 4 European Champions who will be there trying to win this ultimate title.

Even more impressive still, out of the 15 ladies competing, 9 have already won the ladies’ ranking. They have won an incredible 46 World Cups between them!

The ladies hold 9 World and European titles between them.

Whoever wins, will be crowned with the most prestigious title in paragliding history, in a sky where half the pilots have a letter A, the highest possible qualification letter. Or, put another way, almost half of those taking part have either been in the top five in a World Cup or won a task!

Read the profiles of the top pilots on Instagram:https://www.instagram.com/officialparaglidingworldcup/

Keep up with the live commentary (now available in 8 different languages), the scores and the tracking on https://live.pwca.org 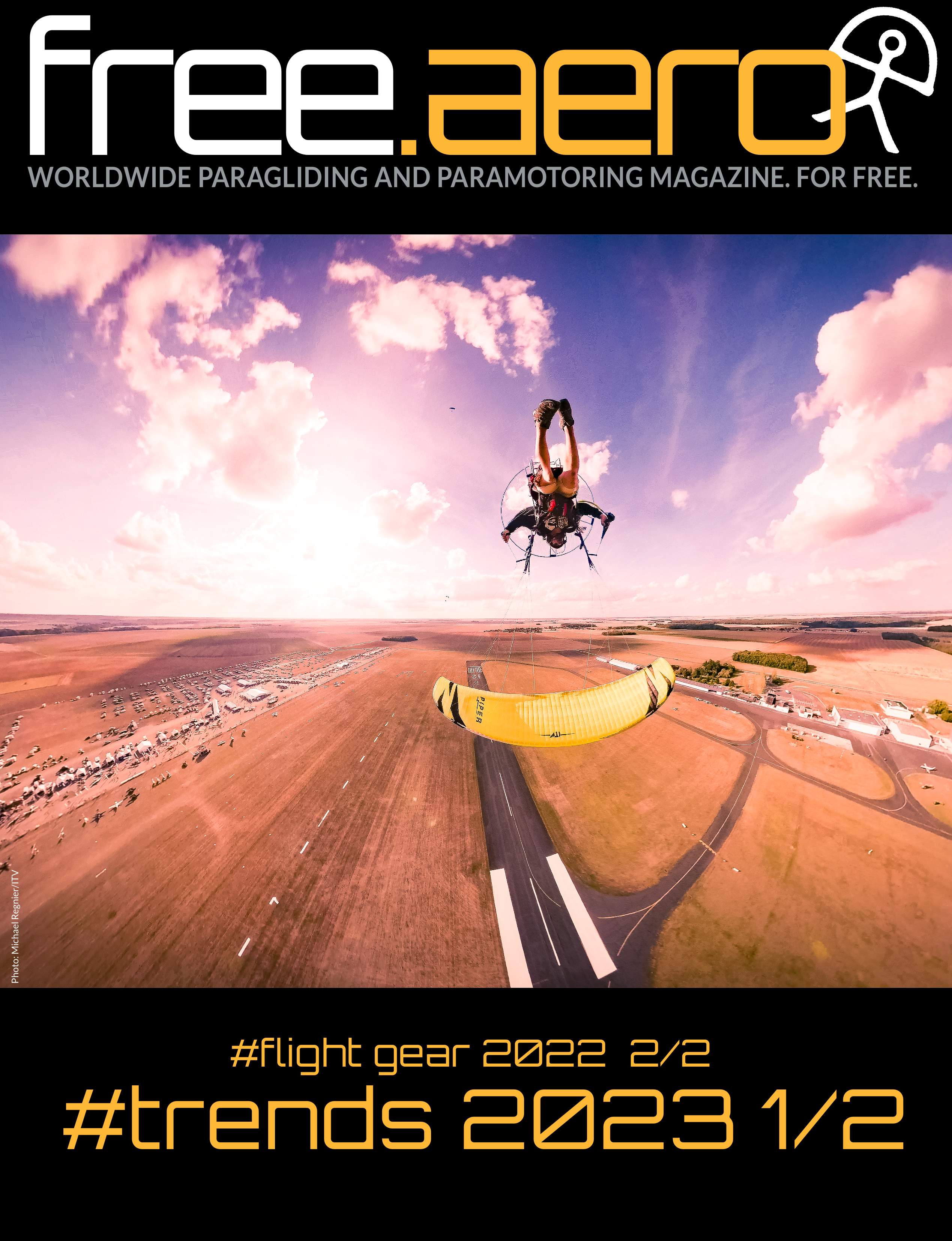 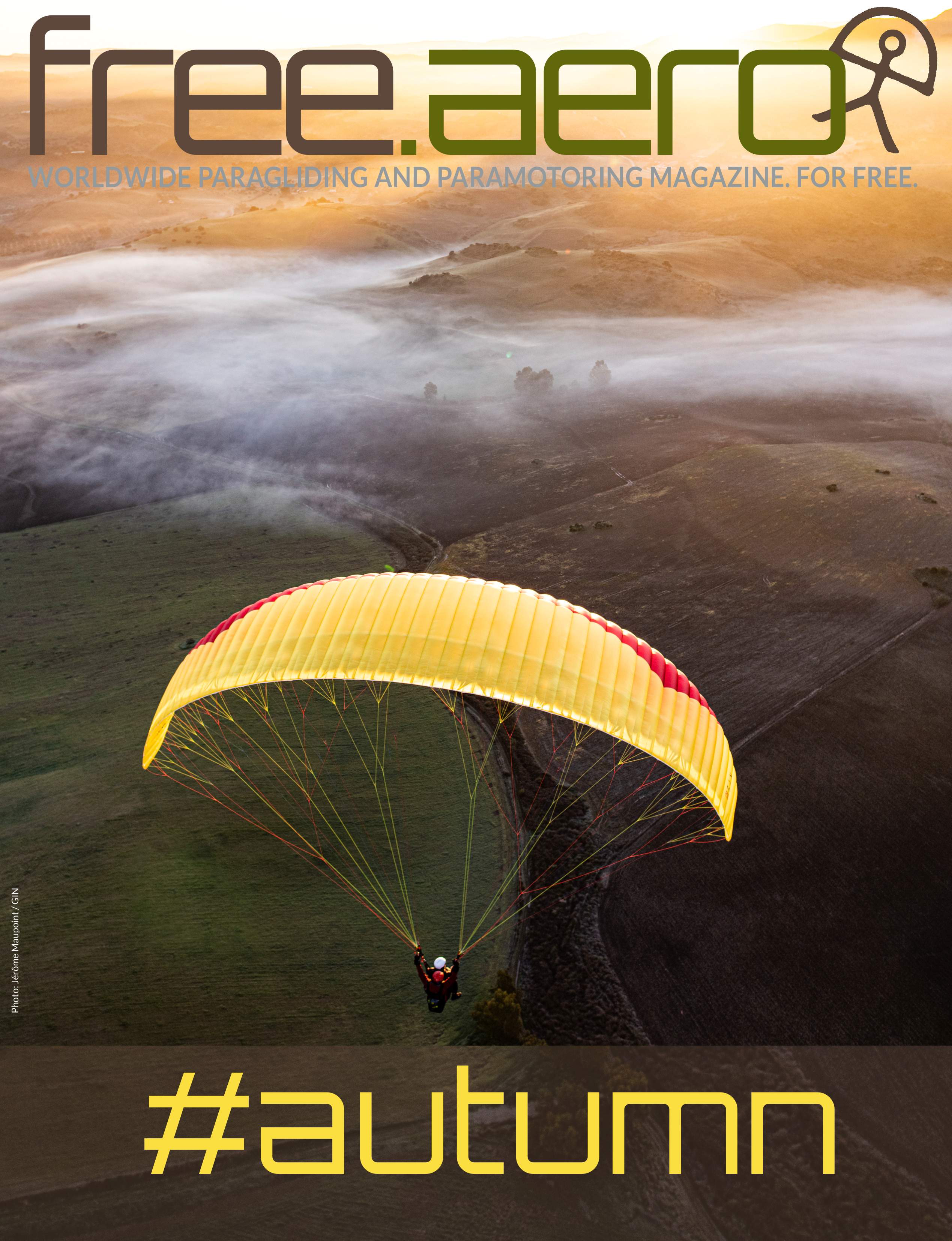 Read the magazine as always for free: 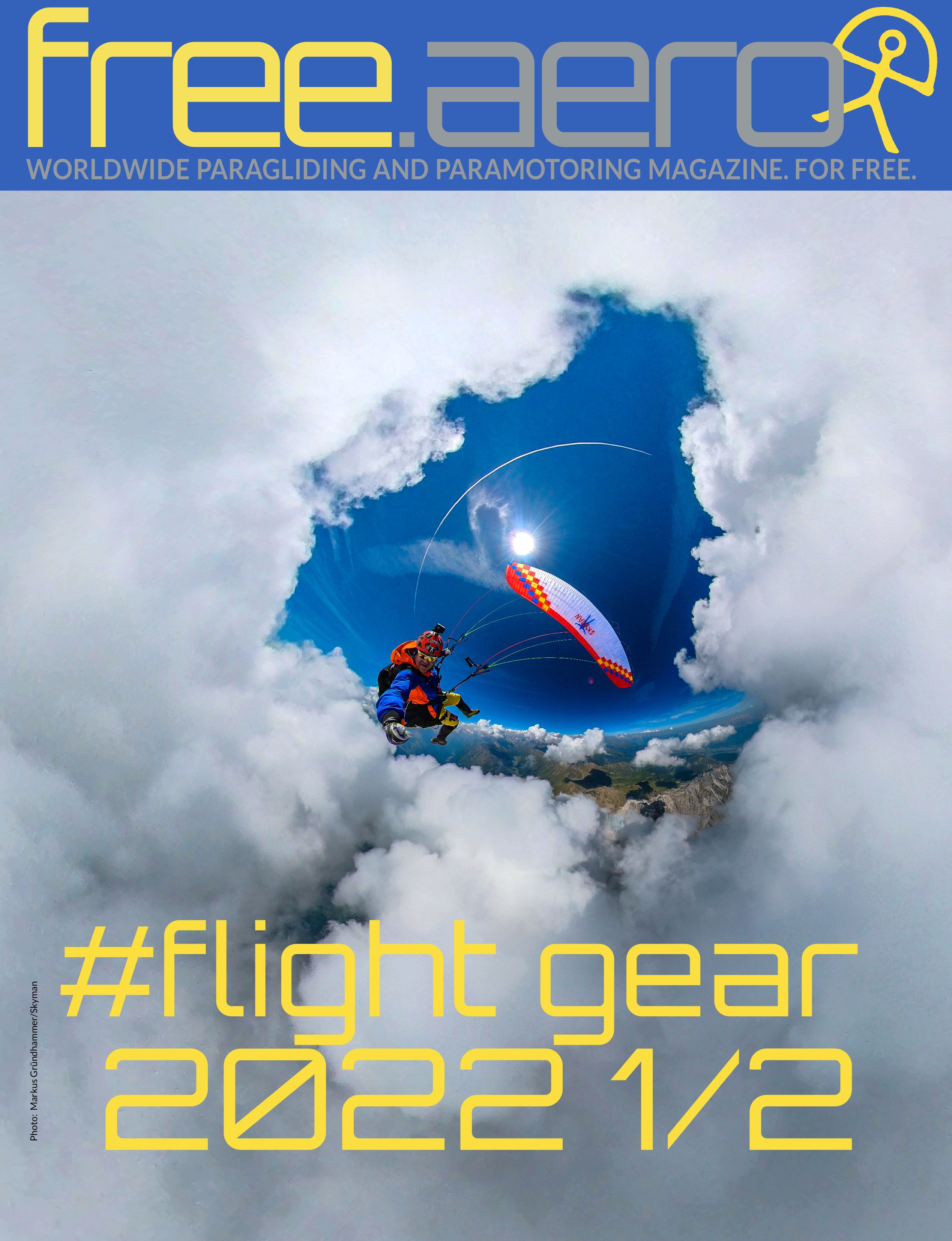 The new developments in 2022, notably those on display or launched since the Stubai Cup in the spring, have been numerous. But a large number of wings which have already been certified have still not been able to be delivered due to the saturation in production.

An interesting trend this summer, for which Swing have created the term ‘Social flying,’ has also appeared: Flying for pleasure, without any performance ambitions, with friends, often on foot and safely.

This is why paragliding is still booming at a time dominated by COVID and the war. In France alone, the number of licences passed has very noticeably increased. 1000 more licences were granted at the end of July 2022 compared to the previous year. Numerous new ‘tolerant’ models have targeted this market segment for safe wings for ‘Social Flying.’ While two years ago, the word we heard the most on each stand was ‘performance,’ this year it is ‘safety’ - a very welcome evolution…

Read the magazine as always for free:

The World Cup first ventured to Roldanillo in 2011, with pilots from 28 countries competing. It was such a great success that two Super Finals were then held there, in 2013 and 2018. PWC is returning in 2022 with pilots from 33 different countries, and the highest pilot quality we’ve ever seen.
Since those early days Roldanillo has become one of the best competition venues in the World thanks to its reliability, easy logistics, thermal quality, textbook flying conditions and most importantly the people.
The people of Colombia have been welcoming pilots with open arms for over a decade and it’s not uncommon to see pilots flooding into Roldanillo on the back of motorcycles, tractors or even a donkey from time to time!!
The Paragliding World Cup starts in a weeks’ time and many top pilots are already landing here to train for this event.

Roldanillo is a traditional Colombian town sitting in the valley of Valle Del Cauca at 925 m. The launch, Augua Panela, is 869 metres above the town with beautiful views and trees for shade. Pilots can expect to find thermals as strong as 5-6 metres a second, with cloud base reaching 3000 plus metres. All of Valle Del Cauca works wonderfully giving very interesting tasks with lots of different routes for pilots to choose from, taking the valley, which side of the valley, or flying the mountains. The landing zones are huge and everywhere, which makes it possible for pilots to get lower than ever imagined low saves.

Roldanillo has become home from home for many of the top pilots on the World Cup circuit, basing themselves here to run courses, adding glitter to our star-studded selection list. All that needs to be said about the pilot quality: ‘CF’ wasn’t enough to get a place!
In addition, Roldanillo 2022 is going to be a great chance to see what Gin's R&D department have been up to. An updated 2022 version of the Boomerang 12 will be put through its paces during the competition by Torsten Siegel before it goes on sale. Honorin Hamard from Ozone will also be stretching his wings flying the first production model of the Zeno 2. The Niviuk X-One is very much on the up too, with more pilots than ever before flying it.
Keep up with all the fun and frolics on the World Cup website, pwca.org and on the PWCA Live App at https://live.pwca.org (which is now a web app). It includes the live Commentary, the tracking and all the scores. For those who can’t work out one end of a paragliding competition from another, the Commentary gives a thermal-by-thermal explanation.
(Photo by Ulric Jessop)
All the results will be available here: https://live.pwca.org/scores?comp=29 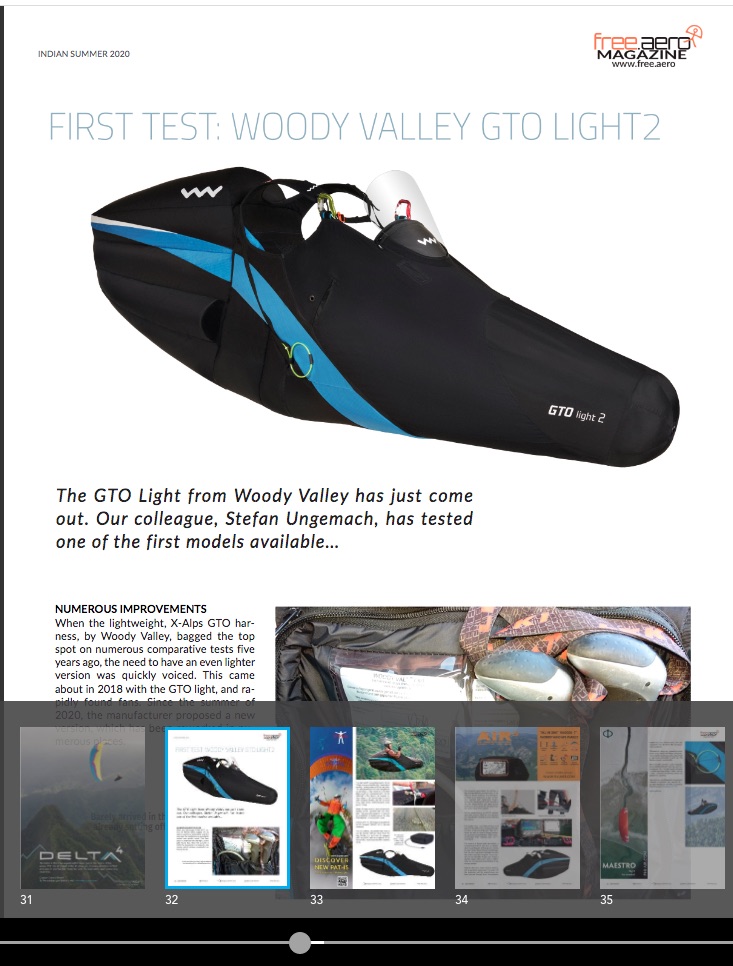 Flashback to our review 2020

When the GTO Light 2 from Woody Valley had just been released, our colleague Stefan Ungemach tested one of the first available models... 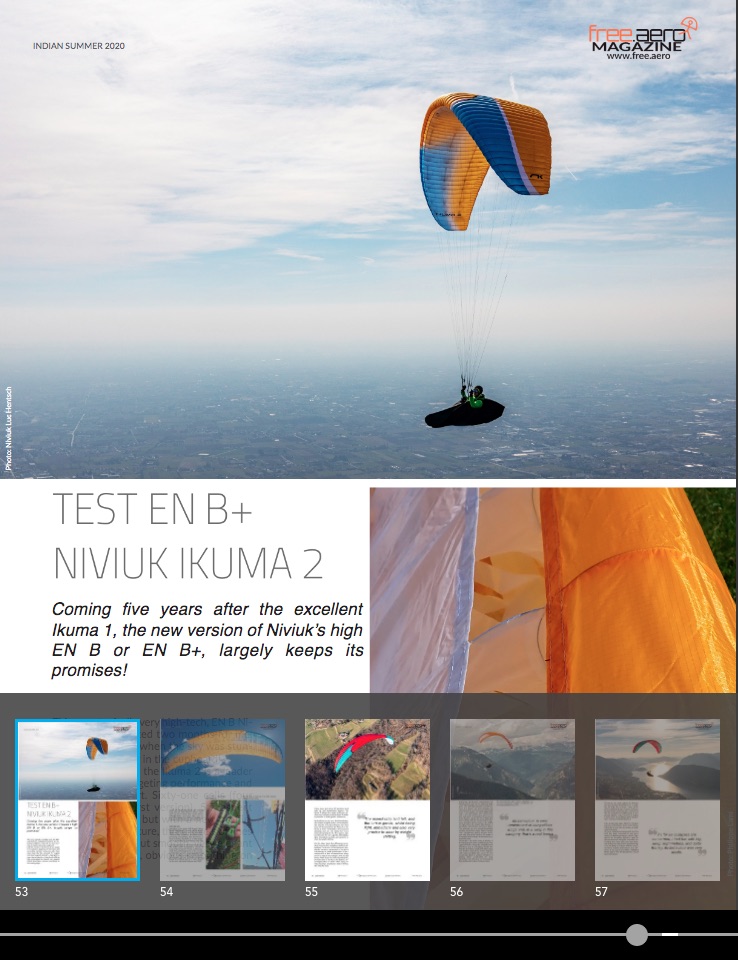 Flashback to our review "EN B+ Niviuk Ikuma 2"

Coming five years after the excellent Ikuma 1, the new version of Niviuk’s high EN B or EN B+, largely keeps its promises!

Flashback to our review 2020: According to GIN, the Vantage 3 is a new concept of paramotor wing: light but durable, easy but nice to fly, aimed at beginner to intermediate paramotor pilots and free flying pilots. Marc Coffinet tested this universal wing for free.aero magazine.

The PWCA Committee and Dimiskovski Goran, PWCA President, are excited to finally present the calendar for PWCA’s 2021/2022 competition season.
All the venues and dates are confirmed.

It goes as follows:
Gemona, Italy: 19th to 26th June
Kopaonik: Serbia: 10th to 17th July
Disentis Switzerland: 8th to 18th August - 11th PWCA Superfinal
Aksaray, Turkey, 4th to 11th September
Gochang, Korea: 26th September - 3rd October
Traslasierra, Argentina: 20th to 27th November
The selective events for the 11th World Cup Superfinal, that will be held in Disentis (Switzerland) from 8th to 18th of August 2021 are the following:
10th Superfinal held in 2019.
5 World Cups held in 2019.
1 World Cup that we had in 2020 - Disentis (because of Covid-travel-restrictions only 3+1 pilots are directly selected)
2021 season’s events that we will be able to run (Gemona and Kopaonik, direct selection will be defined according to Covid-travel-restrictions)
The 2022 season will start in September 2021 and comprise Aksaray - Turkey, Gochang - Korea, and Traslasierra - Argentina.
The season 2022 will continue in the first half of 2022 with 2 or 3 additional events to be ended with a European Superfinal, most likely in late European summer.

With hope for a successful 2021 competition season" 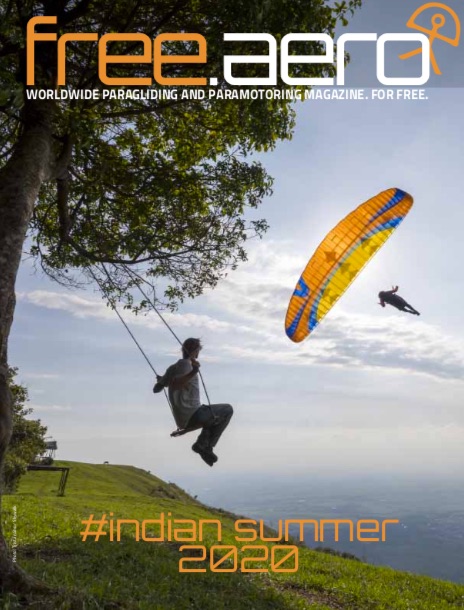 Index Indian Summer 2020
Please remember, as a new feature, you can find every photo and diagram in the actual issues in our new index system: